Last Tuesday we convened at a studio space in North East London, set up some microphones, lit a candle for the ancestors and pummelled our way through several new songs.  Repeating them endlessly until we no longer knew who we were or why we were there.  The intense heat and humidity on Tuesday only added to the surreal sensation of collectively grappling with some immense mentally retarded beast. 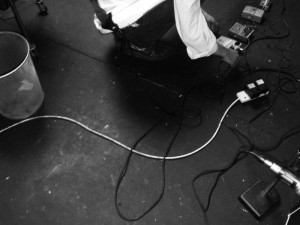 Now we have the task of sifting through the mess we made to select our favourite takes of each song.  More recording next week, with some preliminary mixing in the meantime.  The album itself is still nameless, but some of the new song titles include Mother Iron, The Tongue, Bone Star, False Locusts… More news very soon.

1 thought on “The external employment of manipulable environmental objects”